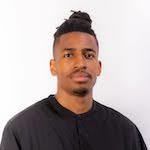 Samuel McIntosh is a dancer, choreographer, and Hip Hop ambassador specializing in various street styles but specifically Popping, Animation, and Boogaloo. He has been dancing for 10 years; learning from some of the most influential dancers and pioneers such as the Electric Boogaloo’s, Slick Dogg of G-Style, Brian “Footwork” Green, Elite Force Crew and many more. One of his first teachers were Valley Style Locking legend, Richard Lechner, and fellow Cleveland native, Anthony “Tony Fresh” Velez.

Samuel has competed locally and nationally in street dance events like Step Ya Game Up in New York City, and Slick City in Chicago. He participated in renowned international competitions such as the International Funk Styles Battle, and Freestyle Session in Los Angeles as well placing at esteemed international competitions such as Under Pressure: International Street Dance and Graffiti Convention in Montreal, Quebec and was a finalist at Kings Of New York in New York City. Samuel also has premiered and performed work in Greater Cleveland and Ohio such as places like Cleveland Dance Festival, Severance Music Hall, the historic Karamu House, Kent State University, as well as nationally such as places like Peridance Capezio Center and The Cutting Room in New York City.

Samuel is also an administrative professional with a degree in arts administration from Baldwin Wallace University. In 2016, he received the Arts Administration Fellowship from the Community Partnership for Arts and Culture in Cleveland, Ohio. He has been an award recipient of the 2019 Cleveland Arts Prize Verge Fellowship, the 2020 Ohio Arts Council Individual Excellence Award, and a 2020 college of the arts distinguished alumni and faculty award recipient receiving the Arts Advocacy Award.